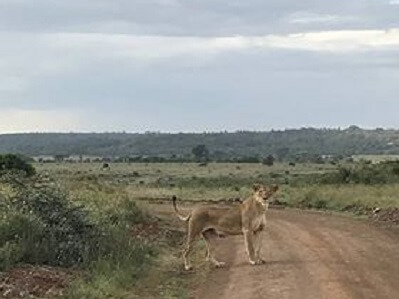 Today while I met this beautiful creature lying on the side of the road a terrorist group attacked a hotel in Nairobi with bombs and gunfire. While we were waiting to see if the lioness would succeed and hunting down one of the many antelopes, people were dying in Nairobi.

It isn’t the first time in recent years terrorist has made attacks in Kenya. Al-Shabab (a militant Somali terror group) has unfortunately succeeded many times. I think everybody remembers the Westgate Shopping Mall attack in 2013 which lasted several days.

At that time my friend Peter lived in Nairobi – Sofie and I wanted to visit, go on a holiday and hopefully see a lot of animals. We never made it, partly due to political unrest but also due to the risk of terrorist attacks. It simply wasn’t safe enough. Now Peter lives in Denmark and I am a tourist in Kenya – Al-Shabab continues to spread fear and taking precious lives.

Being far away from the attack we didn’t notice anything – not until I got a message from my insurance company and the Danish Ministry of Foreign Affairs. I recommend everybody to sign up on ‘rejseklar’, the ministry will keep you posted on any issues in the country you are travelling in (for Danes only). The twitter exploded and I decided to contact my relatives and friends telling them I was ok.

On our way home from the national park Nairobi looked the same, no changes, the same melting pot of people, boda bodas, taxies, busses, cars – the same smells and sounds. Live continues in the capitol.

The lioness didn’t succeed in her attempt to catch an antelope – the antelopes fled, and the lioness wandered off, she passed our car, peed on a bush and continued down the road. Live continues in the national park.