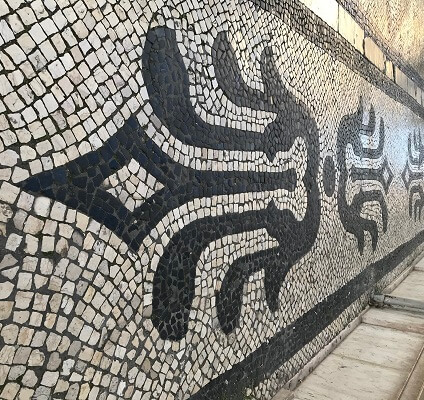 It wasn’t part of my plan to visit Portugal this year. I want to do a Europe tour at some point visiting all the European countries. I want to wait interviewing non-believers in this part of the world where is seems to be easier than in other parts. But since I was in the neighbourhood, I decided to tour Portugal and Spain after the nomad cruise.

Portugal is beautiful, the green mountains, the olive trees, the ocean and the cliffs. The characteristic pavement of white and black stones in the cities and the architecture. Until the 70’ies the country was a catholic dictatorship and has suffered many financial crises since. They are only just recovering from the latest crisis – there are many beautiful old buildings who looks like they are falling apart. At the same time there is lots of restoration going on.

I was so tired after the nomad cruise I needed to take it easy and not do much sightseeing while I spend a couple of days in Lisbon. I just did a walking tour with the other nomads to get a brief insight to the story of the city.

I interviewed 2 non-believers from the secular society (http://www.laicidade.org/) Ricardo and Rodrigo. Portugal is very religious, and the catholic church still has a huge impact on government and every day life. This even though the Portuguese constitution has been secular since 1911. The secular organization is not just for non-believers, members are of all faiths. The primary goal is to implement secularism in Portugal. There are still many issues in everyday life. Non-believers don’t face server challenges like in the African countries I have visited, but people think they are a bit strange.

I also visited the ADFP which is a foundation in Coimbra. It’s founded more than 30 years ago and is based on humanity and helps disabled people, foster kids and others. It owns a natural park, a hotel and a few years back they build an ecumenical temple on the top of a mountain.

The temple is dedicated to peace and to remember the victims of fundamentalism. It is for both believers and non-believers – I find it a bit strange to call it a temple, since it then sounds like a religious place. I understand why they have built even though I would have preferred something more secular.

From Coimbra I rented a car and drove down south through the mountains and landscapes. For once I was on my own – no driver, no public transport. I decided to take a detour, going back in time finding the megaliths (Cromeleque dos Alemenedres) outside Evora. They are thousands of years of old and are amazing. They rest on a mountain top with a beautiful view. There are several megaliths and monoliths in the area. They are breathtaking – incredible they were able to build them back then.

I also visited a former colleague Paul Gerner and his wife Ewa in Lagos in Algarve. We haven’t seen each other for years, but it was just like the old days – nice relaxing and cosy. Paul has been visiting Portugal for more than 30 years. He told me the economy is improving, a lot of investments are being done and many Europeans are moving here with their savings. So, it looks good for the future – and hopefully some of these old amazing buildings can be restored.