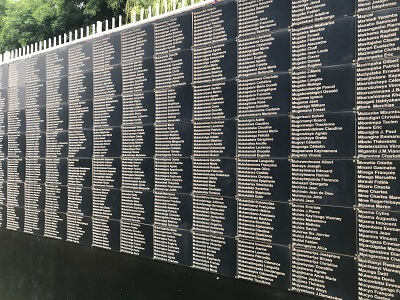 Babies, toddlers, children, youngsters, men and women where tortured, raped, molested and killed in the most horrendous ways – slaughtered by machetes, shot, drowned in latrines. It’s hard to believe that the nice and friendly streets of Kigali where I am today was filled with blood and bodies 25 years ago.

Today I visited the Kigali Genocide Memorial Centre where 250.000 people was buried in a mass grave. It has been an emotional day, me crying several times looking at videos with survivors’ testimonials on how they watched their family members get killed, looking at the remains of those killed, seeing a superman bed sheet, one shoe from a child, the countless pictures of victims.

I get tears in my eyes writing this – a special part of the exhibition shows pictures of babies and kids who were killed with notes regarding each of them mentioning their favourite food, favourite sport, favourite song but also their age and how they died.

Devastating. It is difficult to grasp how human beings can turn into monsters who will do horrible things to their friends and families. They lived peacefully together, were married into each other’s families, were godparents to each other’s children.

History shows that genocides doesn’t happen overnight even though it might look like it. It wasn’t the case during the second world war, it wasn’t the case in Rwanda or the Balkans. It begins with an increasing division, an increase in dehumanising other groups (whether it is ethnicity, religion, politics etc.).

Like in Germany and on the Balkans, it was the people in power who planned the genocide. It was carefully planned in order to wipe out the Tutsis. Women were raped by HIV infected men on purpose to destroy future generations. Like the survivors from the genocide the kids from these rapes are traumatised.

Rwanda has done a lot to overcome the collective trauma – rebuilding the country, prosecuted those who planned and those who committed the killings, supporting the survivors. It will take many years, maybe even generations before some of the wounds have healed.

I sometimes fear that we are going down this road again – the dehumanisation of those who are slightly different than ourselves. The talk about ‘them and us’ creating distance between – creating the illusion of ‘them’ not being human.

I do not know how we can stop this from ever happening again – but we must insist on trying, keeping our humanity.