Back in the ‘office’ 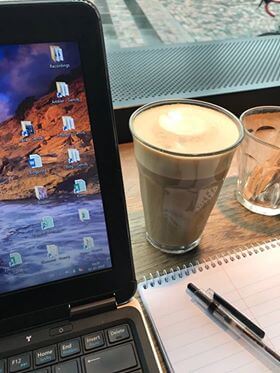 I’m back in Copenhagen, I’m back in my hood on Vesterbro down town Copenhagen. Today I went back to my ‘office’ – a local restaurant BOBs where it is possible to work all day if you are a member of Sp8ces. Through sp8ces (no I don’t get paid to tell about it) you have access to several working lounges in Denmark and Norway – they make agreements with hotels, restaurants, etc. to use timeslots where their spaces are not occupied. It is a great concept – and cheap.

I’ve spent the last couple of days sleeping, doing absolutely nothing besides catching up on Netflix. It will take time before I have processed all my experiences from my journey. I have travelled many kilometres, met so many people – not only humanists, but also other locals and tourists, seen the most amazing landscapes and met fantastic animals. Earth is an amazing and beautiful place.

I know I’m privileged – I have the possibility to visit places where the usual tourist never goes. I’m glad this journey is a combination of following the usual tourist path and meeting people living their lives in these countries. It adds so much more when you talk to people living there and not just other tourists or people from travel agencies.

My journey has showed me the diversity of the different countries. There is so much prejudice in the western world toward the African continent – yes, it is a continent and not a country. Africa is unfortunately often perceived as a country and treated as such in popular culture and media. Africa is three times larger than Europe and occupies 20% of the land mass on Earth – it is huge.

In eastern and southern Africa where I have been travelling, they have many challenges. I travelled during the rainy season but in most of the countries, if not all, they got lesser rain than they need to avoid drought. Climate changes are already impacting this part of the world. The growing population is also impacting the infrastructure – water supply, electricity and transport.

I’ve been travelling for 10 weeks, visited 8 countries and held 30 interviews with non-believers. During the next 3-4 months all the interviews will be published as podcast episodes through Babelfish and I will continue to write articles for POV International.

At the same time, I will plan the next steps of my journey. Which means I will be pretty busy while in Copenhagen – I also want to see, to hug and talk to my friends and family. Right now it is cold and rainy – I hope spring is coming. 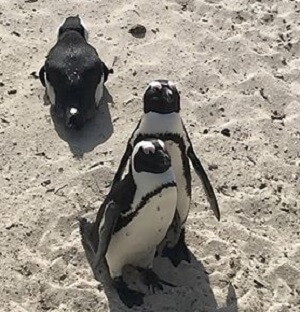 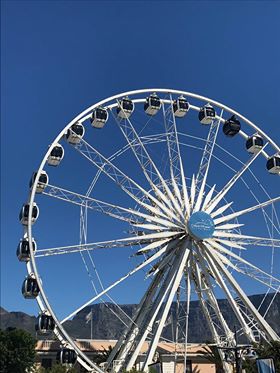 The last few days I’ve focused on being a tourist in Cape Town – no interviews, no writing, no editing. I’ve been exhausted and extremely tired. I’ve had writers block – not being able to write anything that made sense. So, I needed this break, relaxing, watching Netflix and not thinking about the next steps.

This is the most touristy place I have come across on my journey. Off course the safari places in all the other countries are for tourists as well, but it doesn’t feel like it in the same way. It’s not the same kind of tourism. When you chose a safari, you are interested in the animals and proper accommodation. When choosing to be a tourist you are interested in historic sites, entertainment, shopping, beaches and animals in a mix.

My journey has so far been a mix of going on safari and meeting humanists. It has been a good mix – I wouldn’t have managed travelling and only doing one thing. I like the change in focus. But I have forgotten to give myself a break occasionally. When I was on Zanzibar the purpose was to relax for a few days, instead I worked, I edited the podcast and wrote some texts.

I have met so many people, seen so many countries, met so many different cultures, basically my brain has been overloaded with impressions. So, whenever I was thinking about writing a blog post or edit a new episode, I felt tired and wanted to lay down and sleep. I finally listened and decided to go with it and do absolutely nothing and if it required laying in bed watching Netflix all day it would be ok.

Whenever I needed to leave the hotel, I’ve followed the beaten path of any tourist in cape Town. Jumping on the sightseeing bus to get to know the city better. So, I have seen the sights from the top of a bus or walked the city thin.

As a tourist here you don’t have to interact with the population at all if you use the sightseeing buses, hotel shuttles and only visits the tourist attractions. You can keep to yourself and only interact with others if you choose by yourself. So, I choose to keep to myself trying to process all the things I have experienced the last two months.

I have visited 7 countries, interviewed 27 people, published 11 episodes of Babelfish and wrote several blogposts. Which is quite an accomplishment thinking about it. Off course I deserve to take a few days off doing absolutely nothing, watching Netflix and getting room service.

Now I am relaxed and ready to continue – in a few hours I’ll visit Robben Island where Nelson Mandela spend so much time in prison. In a couple of days, I’ll visit Cape Point and, in the weekend, I’ll meet a lot of humanists. No worries – I’m back on track 😊